The Tabrizian Group is a multi-disciplinary research group at the ECE Department, University of Florida. Our team consists of researchers from different backgrounds and nationalities, all passionate about realizing the next generation of Micro- / Nano-Electro-Mechanical System (M/NEMS). 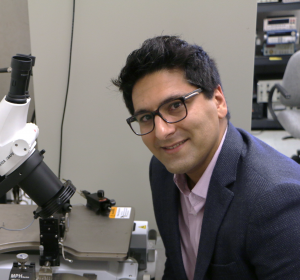 Roozbeh Tabrizian is an Assistant Professor and the Alan Hastings Faculty Fellow at the Department of Electrical and Computer Engineering at the University of Florida. He received his B.S. (2007) degree in Electrical Engineering from Sharif University of Technology, Iran, and the Ph.D. (2013) degree in Electrical and Computer Engineering from the Georgia Institute of Technology. He was a Post-Doctoral Scholar (2014-2015) at the University of Michigan. His research interests include RF micro- and nano-electro-mechanical systems (RF N/MEMS), nonlinear, nonreciprocal, and hybrid NEMS for sensing and information processing, and emerging ferroelectric materials and devices. Tabrizian has received a DARPA Young Faculty Award (2019) and an NSF CAREER Award (2018). His research has resulted in more than 60 journal and refereed conference papers. He holds 16 patents and patent applications. Tabrizian and his students are recipients of multiple outstanding paper awards at top-tier conferences such as IEEE MEMS and Transducers.